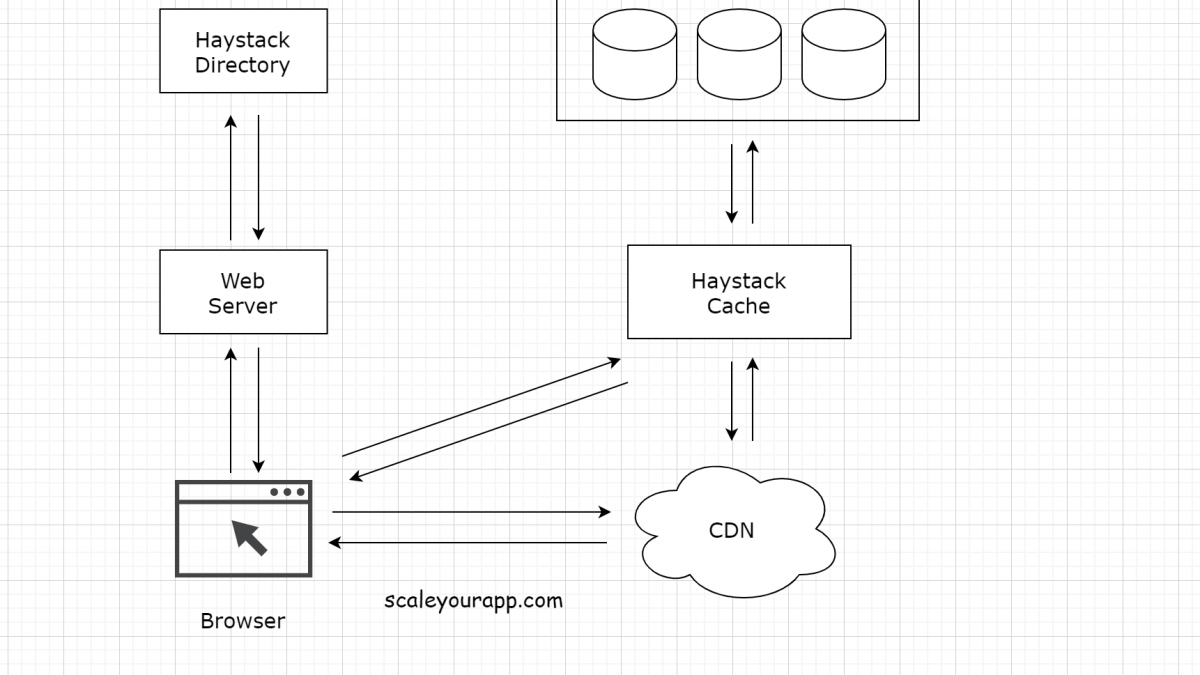 Facebook built Haystack, an object storage system designed for storing photos on a large scale. The platform stores over 260 billion images which amounts to over 20 petabytes of data. One billion new photos are uploaded each week which is approx—60 terabytes of data. At peak, the platform serves over one million images per second.

The browser sends a request to the Facebook web server for a particular photo.

The web server constructs a url for the photo and directs the browser to a CDN. If it’s a cache hit, CDN returns the photo.

The photo is returned to the CDN. CDN caches the photo and forwards it to the browser.

Issue with this photo storage infrastructure

The engineering team reduced the disk operations from ten to three by reducing the directory size of NFS volume from thousands of files per directory to hundreds.

Fetching a photo from the storage comprised of multiple steps:

If you need to understand inode, file handle and how network operations work in a distributed file system. This article on network file system discusses the concept in detail.

In the NAS system, reading the metadata from the disk was a bottleneck.

Most of the photo metadata went unread and consumed significant storage capacity. Also, the metadata was fetched from the disk into the main memory. For fetching photos at a scale of billions, this became a throughput bottleneck. This limited the number of reads that could be performed on a disk in a stipulated time.

What about using a CDN for serving photos?

Two issues with this:

Storing so much data on a CDN is not cost-effective.

CDN would only serve the recently uploaded and frequently accessed data. When it comes to user photos on a social network, there is a significant number of long-tail (less popular photos) requests. All the long-tail requests miss the CDN.

Haystack was designed with some key things in mind:

Keeping the disk operations for fetching a photo to at most one per read and reducing the photo metadata significantly enabling it to load in the main memory made Haystack a low latency and high throughput storage system.

Loading the metadata into the main memory significantly reduced the disk I/O operations providing 4x more reads per second than the NAS-based setup.

Haystack is made fault-tolerant and highly available by replicating photos across data centers in distinct geographical locations.

Learn to design distributed systems from Educative.io, check out the below courses:

Educative.io is a platform that helps software developers level up on in-demand technologies & prepare for their interviews via interactive text-based courses with embedded coding environments. They have over 975,000 learners on their platform.

The links are affiliate links. If you buy the course or a subscription, I get a cut without you paying anything extra.

In this photo storage design, the popular images are served from the CDN and the long tail photos are handled by Haystack.

the Haystack Store, Directory and the Cache.

The Haystack Directory, besides creating the URL, maps logical volumes to the physical volumes. The web server uses this mapping to create the photo URLs. This mapping also comes in handy when uploading photos.

The other functions of the directory are:

Determining if a request for a photo is to be handled by the Haystack cache or the CDN.

Identifying logical volumes that have become read-only either because of operational reasons or having reached their storage capacity.

The photo request is then routed to the CDN. If the CDN misses it, the request moves forward to the Haystack Cache.

The cache is a distributed hash table that uses photo id as a key to locate the data. If the cache doesn’t hold the photo, it fetches it from the store and returns it either to the CDN or the user’s browser.

The cache is primarily used to intercept the requests for the write-enabled Haystack store machines. Because as soon as a photo is uploaded, there is a read request for it. And the file systems of the photo storage workload perform better when doing either reads or writes but not both. The cache intercepts all the read requests for the write-enabled store machines improving the throughput. For this reason, the photos after upload on a write-enabled store are pro-actively pushed to the cache.

The read and write requests to the Haystack Store machines are balanced by the Haystack Directory. The Store is the persistent storage system for the photos.

The read requests to the store hold information such as photo id for a certain logical volume and from a certain physical volume. If the store doesn’t find the photo, it returns an error.

To locate a photo, the store machine only needs the photo id and the logical volume id.

This redundancy averts data loss in case of hard drive and other hardware failures.

Developer Roadmap
If you are a developer and find it hard to cope with constant changes in technology. You are sick and tired of it. You are looking for ways to jump off that endless upskilling treadmill staying relevant and hireable.

You might want to check out my ebook, DEVELOPER’S ROADMAP TO EXCELLENCE AND BUILDING YOUR OWN THING, where I share with you the roadmap and techniques that I follow to keep my sanity in this ever-changing world of software development without killing myself. In it, you’ll find actionable advice and critical points that will enable you to make informed career decisions and accelerate your career at MACH speed.

For understanding commodity hardware, clustering, the infrastructure our applications are hosted on. Check out my cloud course below.

Mastering the Fundamentals of the Cloud
If you need to understand the fundamentals of cloud computing in-depth. Check out my platform-agnostic Cloud Computing 101 course. After having spent a decade in the industry writing code, I strongly believe that every software engineer should have knowledge of cloud computing. It’s the present and the future of application development and deployment.

If a problem is detected with any of the store machines, all the logical volumes on that machine are immediately marked as read-only.